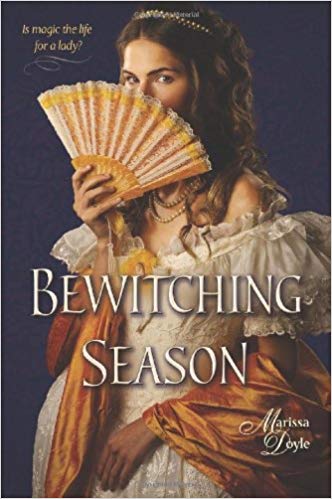 In 1837 England, young daughters of viscounts pined for handsome, titled husbands, not careers.  And certainly not careers in magic.

Twins Persephone (Persy) and Penelope (Pen) Leland are anticipating their first London season with mixed feelings.  Pen can’t wait for the balls and parties and crowds of handsome young men to flirt with, but Persy would far rather stay home with their governess, Ally, and continue her magic studies.  The only thing drawing her to London is the prospect of seeing Princess Victoria, her and Pen’s idol.

But then Ally disappears from a busy London street and the twins are drawn into searching for her…and find that her disappearance is linked to a dastardly plot to enchant the soon-to-be Queen.  Persy also discovers that a good lady’s maid is hard to find, that one should never cast a love spell on anyone after drinking too much brandy punch at a party, that pesky little brothers can sometimes come in handy, and that even boys who were terrible teases when they were twelve can mysteriously turn into the most perfect young men.

“Doyle offers a heart-throbbing romance full of magic and royal-court intrigue…. Fans of historical mysteries will find this a page-turner.” —Kirkus

Bewitching Season was enormous fun to write–I hope you enjoy reading it as much as I enjoyed writing it!

One of the best parts of writing it was incorporating historical people, circumstances, and events into a fantasy novel.  Persy and Pen and their friends and family are, of course, fiction.  But Princess Victoria, Queen Adelaide, Princess Sophia, the Duchess of Kent, and Sir John Conroy really existed, and I have done my best to draw their characters based on the historical record left in diaries, letters, and other account of the day.

Even more amazingly, the tense situation between Princess Victoria and Sir John was real as well.  Sir John really did do his best to try to insinuate himself into the Princess’ life, first by scheming with her mother (the Duchess of Kent) to force the Princess to request a regency so that he could be the power behind the Duchess as Regent.  Later, when this seemed unlikely to succeed, he tried to induce Victoria to promise to take him as her Private Secretary, even attempting to physically force her to sign a promise when she was gravely ill.

Juicy stuff, huh?  So it was only a brief detour from reality to ask, “What if Sir John had tried to use magic to get his way?” 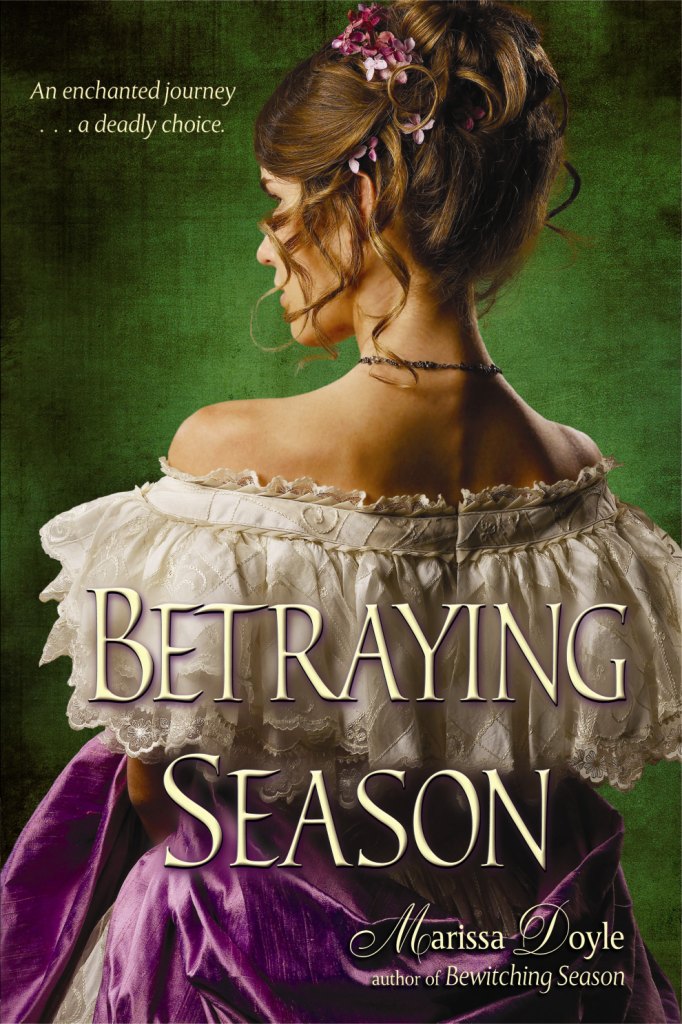 Penelope Leland has come to Ireland to study magic and prove to herself that she is as good a witch as her twin sister Persy. But when Niall Keating begins to pay her court, she can’t help being distracted from her studies. Especially when she learns that the handsome young nobleman is reputedly an illegitimate cousin of the new young Queen Victoria, her friend and idol, whom her sister saved from an ambitious wizard’s control spell the year before.

Niall Keating has strict orders from his sorceress mother Lady Keating: to make young Miss Leland fall in love with him so that she can be convinced to use her magical powers to help reconcile him to his true father, the Duke of Cumberland, Queen Victoria’s uncle. Niall is delighted to comply until he discovers his mother’s true aim: to assassinate Queen Victoria by magic and put Niall’s father on the throne of England.

Penelope is thrilled when Lady Keating reveals her powers and offers to tutor her in magic. But Niall has fallen deeply in love with the lovely young woman. Even if he halts his mother’s evil plans, will Penelope be able to forgive him for trying to seduce her into a plot against her beloved queen?

“Whether Doyle is describing the Irish countryside, a magical incantation, or a lover’s kiss, her writing is compelling, and it will be hard for readers not to be swept away by this invigorating story.” —Booklist

Like Bewitching Season, Betraying Season is based on a nugget of historical fact: that until she married and had children, Queen Victoria’s heir was actually her uncle, once the Duke of Cumberland and then the King of Hanover in Germany (as a female, Victoria was not able to inherit the Hanoverian crown which her male forbears had held).

Cumberland had rather a fearsome reputation: it was rumored that he’d murdered his own valet, among other unsavory (and probably untrue) rumors. As he was an arch-conservative and among the more intelligent and politically involved of George III’s sons. it could be that these rumors were put about by the Whigs to discredit him. Whether or not they did, the rumors flourished…and when the young, unmarried Victoria became queen, new rumors surfaced that her uncle was not content with the Hanoverian crown and wanted the British one as well. Many were convinced that he was plotting to assassinate the new young queen, and it wasn’t until she was safely married and had borne a few children that the rumors finally died away.

So of course I had to use such a juicy story as the basis for one of mine. Tying it in with Ireland made it even more fun to write…and, I hope, to read! 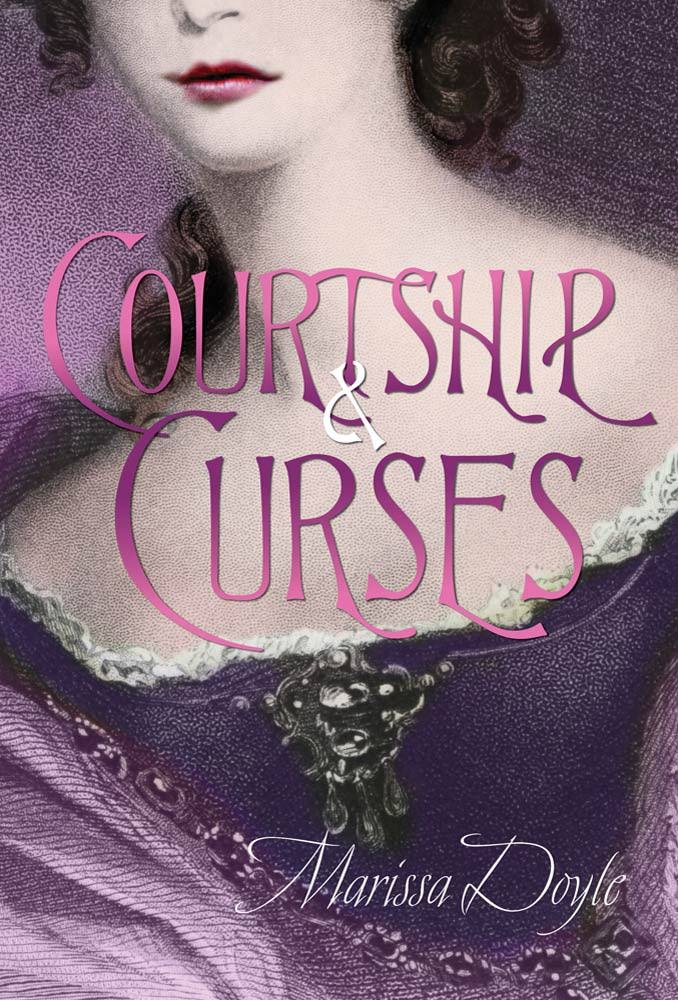 Sophie’s entrance into London society isn’t what she thought it would be. Mama isn’t there to guide her. Papa is buried in his work fighting Napoleon. And worst of all, the illness that left her with a limp, unable to dance at the Season’s balls, also took away her magic. When the dashing Lord Woodbridge starts showing an interest in her, Sophie wants to believe it’s genuine, but she can’t be sure he’s feeling anything more than pity.

Sophie’s problems escalate when someone uses magic to attack Papa at her first ball of the Season, and it soon becomes clear that all the members of the War Office are being targeted. Can Sophie regain her own powers, disentangle her love life, and save her father—and England?

In the glittering ballrooms of Regency London and Brussels on the eve of the Battle of Waterloo you’ll meet a sketchy fortune hunter, a magic-sensing parakeet, difficult aunts, a long-lost love, the Duke of Wellington…and a courageous young girl trying to find her balance in a dangerous world.

“Doyle has a talent for writing historical fiction…” –VOYA

“Similar in style and substance to her previous books, Doyle again provides a read that’s entertaining but also informative…. Especially crisp is the whodunit story line…. A nice history and mystery mingle.” –Booklist

Writing this book was like eating a huge box of candy, at least to this history geek. The second decade of the 19th century was an amazing time in London, in particular 1814-1815 which saw the two defeats of Napoleon (and the accompanying celebrations.) These were the golden years for that London social institution, Almack’s, where a group of aristocratic ladies decreed who was “in” and who wasn’t, including the fascinating Lady Jersey (I dream of writing a book about her and the Patronesses of Almack’s some day!) Most of the places mentioned in this book were real, including Rotten Row and Carleton House, London home of the Prince Regent. The party at Carleton House where Sophie and Peregrine quarreled was based on an actual one, as were smaller details like Sophie’s clothes and social customs like riding at 5 pm in Hyde Park and wearing black gloves when in mourning. To prevent confusion, I have changed or blurred a few details as a compromise between historical correctness and ease of understanding for today’s readers.

Brussels really was the party capital of Europe in spring 1815 as I have depicted it. English aristocrats swarmed over the Channel after Napoleon’s first defeat in 1814, having been deprived of European travel (and shopping!) for so many years. Between them and the masses of officers sent over to engage in re-defeating Napoleon (which they eventually did, at the Battle of Waterloo in June), life in Brussels was a constant succession of balls, concerts, dinners, picnics, breakfasts, routs, and card parties. Even on the eve of the first engagements of the Battle of Waterloo Brussels partied, and many British officers fought and died still in their evening clothes. If you’re interested in learning more about this time and place, I highly recommend Georgette Heyer’s An Infamous Army (her account of the Battle was studied at Sandhurst, Britain’s West Point) and Nick Foulkes’s non-fictional but delightfully engaging Dancing into Battle: A Social History of the Battle of Waterloo.

Sophie’s illness was polio. A small part of her is based on a lady I knew and loved as a child who’d had the same affliction as Sophie…but who was not, as far as I know, a witch. She wore special shoes that helped her walk more normally…as did, by the way, Prince Talleyrand, foreign minister to both Napoleon and Louis XVIII, who was born with a clubfoot. It didn’t keep him from being one of the shakers and movers of the era, but not all people with disabilities were so lucky. Outward disabilities like Sophie’s were often assumed to be symptoms of inner defects, either mental or spiritual, or divine punishment for somehow being “bad”. As much as I love history, there are parts of it I am glad no longer hold true. 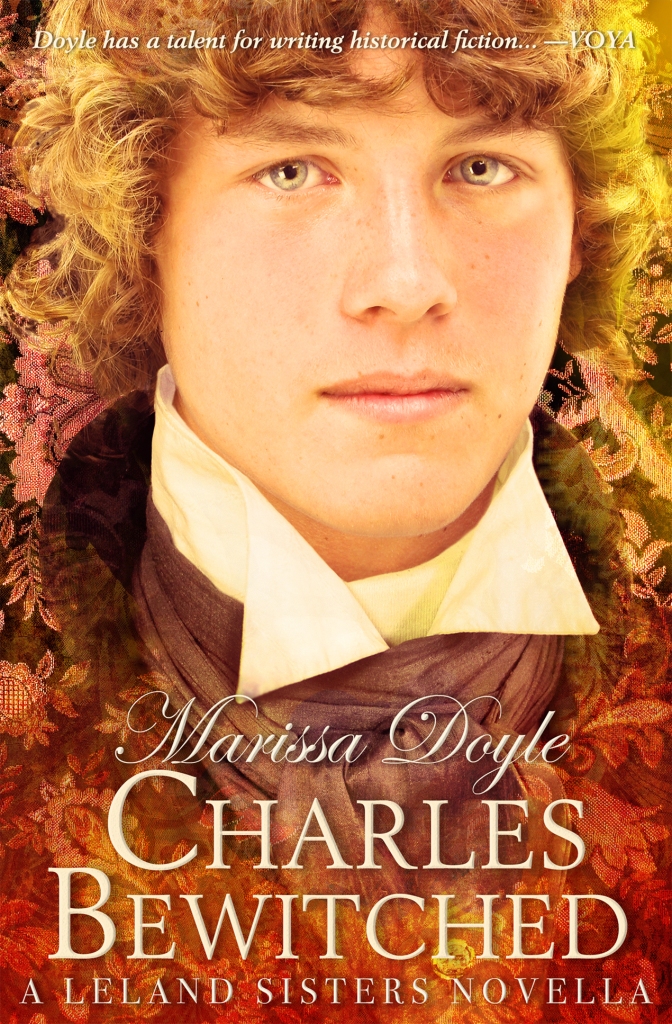 Sixteen-year-old Charles Leland is not looking forward to his summer holidays from Eton—not when he has to spend them cramming history to make up for a less-than-stellar grade last term. Even the thought of staying with his sister Persy and her husband Lochinvar while his parents are in Ireland can’t cheer him up.

But studying quickly takes a back seat to finding out what has happened to Persy, who disappears from home the day he arrives. All signs indicate that she’s been kidnapped by gypsies…but a gypsy boy named Nando convinces Charles that her disappearance has a much more otherworldly explanation.

Now Charles must brave the perils and sheer strangeness of the fairy lands to try to prevent Persy from being forcibly married to a powerful fairy lord. With the help of the fairy lord’s own younger (and alarmingly pretty) sister, a copy of History and Policy of the Norman and Angevin Kings that he’s supposed to read before September, and Her Majesty Queen Victoria, he just might be able to do it. But will he also be able to rescue himself?

So many people have written to me over the years asking when Charles would get his own story that I knew I had to write him one some day…and I’m delighted to finally offer it. I hope all those readers will find it worth the wait, and enjoy Charles’s progress from the “Chucklehead” of Bewitching Season to hero of his own tale.

A note about the cover (isn’t it perfect?): When my wonderful and multi-talented designer Lisa Amowitz (who is also a YA author in addition to being an artist/designer) and I were looking for images to use, we just couldn’t find an image of the right clothes for Charles to wear…until I stumbled upon an Etsy shop that features cravats for all occasions.  So, many thanks to Christina at www.elegantascot.com for letting us use one of her images to depict Charles’s sartorial splendor! 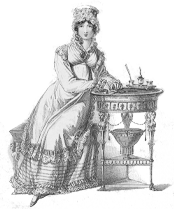