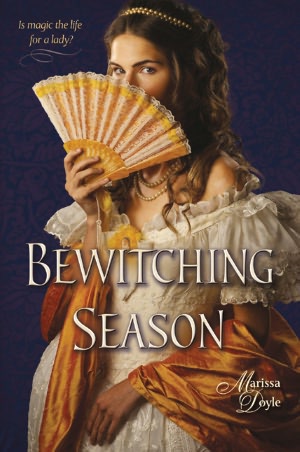 “I did not!” the Honourable Persephone Leland snapped back at her twin sister Penelope who was perched on the battered schoolroom table. She rubbed her damp palms on her apron–they still tingled, the way they usually did after she’d cast a spell—and looked anxiously at her little brother, sprawled pale and motionless on the faded Turkish carpet in front of her. What would she say to Mama? “I seem to have killed Charles during lessons this morning” would probably not go over well as a conversation starter at lunch. She turned to her governess. “Oh, Ally, I did it just like the other times!”

Miss Allardyce had assigned them halting spells today. While Pen watched, Persy had stopped Charles in his tracks a dozen times with her command of repellere statim! But this time her spell’s force had not only halted him but also knocked him over backward. She dropped to the floor and grabbed one of his limp hands. “Charles, please, are you all right?”

Miss Allardyce sighed. “Penelope, do not take the Lord’s name in vain. A true lady is known by her conduct under trying circumstances. And Charles, get up before your sisters have hysterics. I know you’re hoaxing us.” She bent and gave one of his brown curls a sharp tug.

Persy exhaled in relief as her brother opened his eyes and gave her an impudent grin. “Got you, Persy.” He sprang up and held out a hand to her. “Tell me you weren’t just a little worried.”

She was, but she’d never admit it to him, the little beast. Ignoring his hand, she scrambled to her feet and shook out the creases in her pink morning dress.

Honestly, why did Ally let Charles sit in on their magic classes when he was home from school on holidays? Yes, it was helpful to have someone on whom to practice spells like this one, and they couldn’t very well ask any of the servants. Magic was not something one advertised, as Ally frequently reminded them. It was risky enough having their lessons in the schoolroom, but Ally had set up a warning spell at the end of the corridor in case the footman came up with more coal for the fireplace. Still, practicing on Charles was sometimes too much.

“I wasn’t worried. In fact, I rather hoped I’d found a spell to knock you unconscious. It would have been terribly useful,” she said, looking down her nose at him. He grinned again and stuck out his tongue at her.

“Persy,” Ally chided. “Is that a commendable sentiment?”

“No, but it’s an honest one.” Persy collapsed on the yellow brocade sofa Mama had sent up here when it became too disreputable for the morning room. Between practicing that halting spell and the hour of object teleportation and manipulation before that–not to mention Charles’ shenanigans—her head was starting to pound. Hard magic practice always did that to her. “I think I’ve had enough for one morning, please, Ally. It’s Pen’s turn.”

Miss Allardyce frowned as she consulted the watch at the waist of her neat maroon dress. “You have another ten minutes scheduled—”

Persy groaned and began to rise.

“—but I shall excuse you for this morning.” She bent over Persy and brushed her fingers across her forehead. “Better?” she added softly, belying her stern look.

“Yes, thank you.” Persy closed her eyes and sighed. She would have to learn Ally’s headache-curing spell one of these days.

Pen shook her head as she rolled up the sleeves of her dress. “You’re such a goose, Persy. If you didn’t stay up late every night reading Ally’s spellbooks, you wouldn’t get the megrims.”

“But if I don’t study them now, when will I be able to? We leave for London next week.” Persy kept her eyes closed so she wouldn’t have to see how Pen’s face lit up at the mention of London.

“I know.” Pen’s voice was dreamy. “I can’t wait. Balls and parties and getting presented at Court–”

“—and having to be polite to witless boys who only talk about clothes and boxing matches—” Persy grimaced as she thought of it.

“—and men with exquisite manners asking us to dance—” Pen ignored her.

“—and society beauties in the latest fashions—”

That stopped Persy dead. If she had to “come out”—go to London and be presented to Queen Adelaide and attend balls and be a proper society miss looking for a husband–then the least that should happen was that she get a glimpse of Princess Victoria. Ever since they’d learned that they shared the Princess’s May birthday, she and Pen had scoured the illustrated papers for pictures and snippets of information about the girl who would someday be Queen of England. Imagine, someone just their age—and a girl, just like them—as queen…after so many decades of disreputable old men ruling the country, it was fascinating to contemplate.

“Do you think we ever will see her?” she couldn’t help asking.

“Just think…if she should become Queen tomorrow,” Pen’s voice was breathless. “Then we’d be presented to—to her!”

“Girls.” Ally stepped forward, shaking her head but smiling. “That would presuppose the death of our present King, which is hardly kind or proper. And if Victoria were to become Queen before she turns eighteen, it is more likely that you’d be presented to her mother as the Queen’s Regent.”

“Oh.” Pen sounded disappointed. “Well, it was just a thought. But maybe we will see her, just the same…they say she’s ever so tiny, but has the most beautiful blue eyes. Do you remember the sketch of her Grandmama sent us last year? I wonder how she wears her hair now? Do you think it’s like that illustration we saw in—”

Ally cleared her throat. “Might we continue with our lesson before the bell rings for luncheon? Charles, if you will…Charles?”

A snoring sound issued from under the sofa. Persy started, and peered under its edge.

“I got bored and went to sleep while you talked about that girl stuff,” he said, opening one blue eye and squinting at her.

Eleven year old boys. What else should she expect? Persy poked him. “Come on out, Chucklehead.”

“Don’t want to. I’m tired of getting pushed around while you practice magic on me. Why can’t I learn too, Ally?” He rolled out from under the sofa and glared up at them. “I’m stuck going to rotten old Eton while you two have fun here doing spells all the time.”

Ally shook her head at him. “I’ve told you, Charles. Boys your age don’t usually have the capacity for magic. And in your family it has been the girls who possess it. Attending Eton is a privilege that only you, as a boy, can enjoy. Don’t begrudge your sisters their education.”

“You get to learn Greek,” Persy said glumly. Oh, how she’d love to learn ancient Greek, and be able to read the Odyssey in Homer’s own words.

Pen made a face at her and strolled to the ivy-shrouded window. “And fencing. Now that would be exciting. Come on, Chuckles. Let’s get busy. It looks like the rain’s finally stopped. After lunch you can go outside and play and not endure the torture of watching us anymore.”