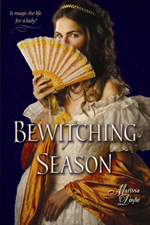 About the Book:
In 1837 England, young daughters of viscounts pined for handsome, titled husbands, not careers.  And certainly not careers in magic.

Twins Persephone (Persy) and Penelope (Pen) Leland are anticipating their first London season with mixed feelings.  Pen can’t wait for the balls and parties and crowds of handsome young men to flirt with, but Persy would far rather stay home with their governess, Ally, and continue her magic studies.  The only thing drawing her to London is the prospect of seeing Princess Victoria, her and Pen’s idol.

But then Ally disappears from a busy London street and the twins are drawn into searching for her…and find that her disappearance is linked to a dastardly plot to enchant the soon-to-be Queen.  Persy also discovers that a good lady’s maid is hard to find, that one should never cast a love spell on anyone after drinking too much brandy punch at a party, that pesky little brothers can sometimes come in handy, and that even boys who were terrible teases when they were twelve can mysteriously turn into the most perfect young men.

“Doyle offers a heart-throbbing romance full of magic and royal-court intrigue….Fans of historical mysteries will find this a page-turner.”
—Kirkus

Bewitching Season was enormous fun to write–I hope you enjoy reading it as much as I enjoyed writing it!

One of the best parts of writing it was incorporating historical people, circumstances, and events into a fantasy novel.  Persy and Pen and their friends and family are, of course, fiction.  But Princess Victoria, Queen Adelaide, Princess Sophia, the Duchess of Kent, and Sir John Conroy really existed, and I have done my best to draw their characters based on the historical record left in diaries, letters, and other account of the day.

Even more amazingly, the tense situation between Princess Victoria and Sir John was real as well.  Sir John really did do his best to try to insinuate himself into the Princess’ life, first by scheming with her mother (the Duchess of Kent) to force the Princess to request a regency so that he could be the power behind the Duchess as Regent.  Later, when this seemed unlikely to succeed, he tried to induce Victoria to promise to take him as her Private Secretary, even attempting to physically force her to sign a promise when she was gravely ill.

Juicy stuff, huh?  So it was only a brief detour from reality to ask, “What if Sir John had tried to use magic to get his way?”

For more juicy history, please visit the blog I share with YA writer Regina Scott at www.nineteenteen.blogspot.com