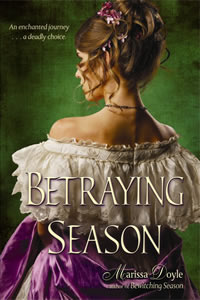 Penelope Leland has come to Ireland to study magic and prove to herself that she is as good a witch as her twin sister Persy. But when Niall Keating begins to pay her court, she can’t help being distracted from her studies. Especially when she learns that the handsome young nobleman is reputedly an illegitimate cousin of the new young Queen Victoria, her friend and idol, whom her sister saved from an ambitious wizard’s control spell the year before.

Niall Keating has strict orders from his sorceress mother Lady Keating: to make young Miss Leland fall in love with him so that she can be convinced to use her magical powers to help reconcile him to his true father, the Duke of Cumberland, Queen Victoria’s uncle. Niall is delighted to comply until he discovers his mother’s true aim: to assassinate Queen Victoria by magic and put Niall’s father on the throne of England.

Penelope is thrilled when Lady Keating reveals her powers and offers to tutor her in magic. But Niall has fallen deeply in love with the lovely young woman. Even if he halts his mother’s evil plans, will Penelope be able to forgive him for trying to seduce her into a plot against her beloved queen?

Whether Doyle is describing the Irish countryside, a magical incantation, or a lover’s kiss, her writing is compelling, and it will be hard for readers not to be swept away by this invigorating story. –Booklist

Like Bewitching Season, Betraying Season is based on a nugget of historical fact: that until she married and had children, Queen Victoria’s heir was actually her uncle, once the Duke of Cumberland and then the King of Hanover in Germany (as a female, Victoria was not able to inherit the Hanoverian crown which her male forbears had held).

Cumberland had rather a fearsome reputation: it was rumored that he’d murdered his own valet, among other unsavory (and probably untrue) rumors. As he was an arch-conservative and among the more intelligent and politically involved of George III’s sons. it could be that these rumors were put about by the Whigs to discredit him. Whether or not they did, the rumors flourished…and when the young, unmarried Victoria became queen, new rumors surfaced that her uncle was not content with the Hanoverian crown and wanted the British one as well. Many were convinced that he was plotting to assassinate the new young queen, and it wasn’t until she was safely married and had borne a few children that the rumors finally died away.

So of course I had to use such a juicy story as the basis for one of mine. Tying it in with Ireland made it even more fun to write…and, I hope, to read!