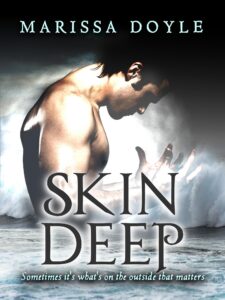 Want it? Available in e-book  and print at Amazon,  Barnes and Noble,  and independent booksellers, and in e-book at Book View Cafe (both MOBI and EPUB formats), Apple Books, Google Play and Kobo.

I’m very excited to usher Skin Deep into the world! It’s got some of the things I love most in it—the sea, quilting, and selkie folklore—so it was great fun to write. I hope you’ll enjoy it too!

Skin Deep has already received a 4 1/2 star Reviewer’s Top Pick designation from Night Owl Reviews!  “The story is full of mystery and magic along with suspense and passion…. I was completely enchanted by Alasdair and Garland’s tale…”

“…this is such a delightful story, I was utterly charmed by it and found it such a fun read….the characters were wonderful, the world building was very good and I would certainly recommend this story to someone looking for an interesting twist to selkie legends.”
-Coffee Time Romance Reviews, 4 cups

About the book: After a painful divorce, Garland Durrell looks forward to settling into her home on Cape Cod to make the quilts that are her passion. On the first morning of her new life she finds a man and a small boy washed up on the beach, both badly wounded. Since the town chief of police is strangely reluctant to help, Garland takes on the care of the mysterious pair who don’t seem to remember what happened to them–and feels her own heart begin to heal.

Alasdair does remember. He and his son Conn are the last of the ruling family of selkies from the waters around the Cape, locked in a decades-long struggle with an evil that threatens all, selkie and human. He’s not sure if he can trust the lovely, blue-eyed woman who takes them in until he touches one of her quilts and feels the magic she’s sewn into it…and the emotions that he never thought he’d feel again.

But the evil entity that stole Alasdair’s sealskin and left him for dead quickly senses both his presence and Garland’s magic, and is determined to destroy one and possess the other. Only Garland and her quilts, made with a power she barely believes she has, can save them all from destruction—if she can avoid being destroyed first.

BONUS!  A Storm at Sea quilt plays an important role in Skin Deep, and I think it’s one of the most visually interesting quilt designs of all. Have fun creating your own quilt magic with these Storm at Sea quilt pages to download and print out for coloring! (To download and print these pages out, look for the download button in the toolbar that will appear if you hover your mouse at the bottom of the page.)